Introduction to the Inscriptions

Welcome to the Toxteth Park Municipal Cemetery situated in Smithdown Road, Liverpool.   Some time ago I was looking for some family head-stones in this cemetery and found that alas no transcriptions were available.   This made my research very difficult.  Over time I have recorded all of the gravestones in the cemetery and they are available to search and browse on this website.

The cemetery itself is divided into a number of different sections.   You will see these on the plan of the cemetery.   They do not number neatly but are :-

The original registers for both the Consecrated and General Sections are available for inspection on micro-film at the Liverpool Reference Library.

I have used two methods of numbering and identifying where a particular grave is located.   The first is by the official grave register numbers.   Apart from the side rows, the graves in the early sections are generally numbered lineally, that is running left to right as you look at the rows.   The official grave numbers you will find after the surname and in brackets e.g. (C.C.Lt.111).   This is the entry for the above Elizabeth WATLING.   This means that that grave is in Consecrated Section C.Left. and the ‘111’ is the grave number from the official register.   Occasionally you may find a question mark after the number and this is to indicate that it is my best estimate of the number. 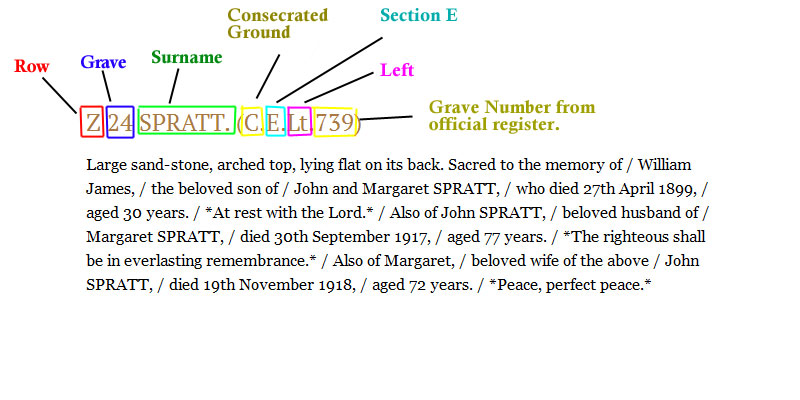 My own method of recording the graves is by Section, Row, Number and Surname.   This is purely my own system which you may or may not like.

This is straight forward enough.   There are thirty eight sections in the Consecrated Ground spread throughout the cemetery.   The Cemetery  plan shows where each section is.   You should remember that Consecrated Sections A through to F are duplicated.   Thus one is called A Left whilst the other is called A Right and so on.   You should also be aware that you will find a Section 1 and a Section I so be careful when checking the registers.   You should also be careful with the handwriting in the registers.   Thus Section ‘Q’ can often appear in the registers as an ‘L’ and Section ‘J’ and ‘I’ are one and the same.

For the rows I have adopted the system of giving each row a letter.   The first row, as you look at any Section, being row ‘A’ and the next one back ‘B’ and so on.   In most Sections the first half of the rows face one way, then half way across they face the opposite way.   Occasionally odd rows are fitted in but they are easy to identify.   In most cases the head-stones will face you and run left to right.     Just occasionally you will find a row that starts facing one way and half way across changes to face the opposite way.

For the numbering the furthest grave to the left as you look at the row will be number 1, then 2, then 3 and so on as you move along the row.   This applies when the rows change direction.   Number 1 is the furthest to your left.   Remember that I have allowed for each grave in the numbering whether or not it has a head-stone.   Where a grave has no head-stone it will appear in the transcriptions as a ‘Gap’ with the number of gaps alongside i.e. ‘Gaps x 4’.

Finally is the surname, this is the surname of each person who appears on the head-stone, but not necessarily everyone who is buried in the grave.   It may be that someone was buried in a grave but they have not been included on the head-stone for some reason.   Equally people have been commemorated on a head-stone but are not buried in the grave.   This applies to some burials in Liverpool, overseas, at sea and of course war deaths.

I have included two plans for each section.   The first one shows the plot numbers.   The second plan is the same one but shows the row lettering.

A note of caution.   Do not rely on what I have recorded.   Check the inscription yourself.    It is just too easy to make a mistake between recording the transcription, and then typing it up.   Some of the stones are easier to read that others, shiny marble especially can be particularly difficult.    I also found a large number of head-stones to be showing varying levels of weathering.   I have done my best to read them.   It is also sometimes hard to distinguish between some things.   A ‘3’ can easily be a ‘5’ and ‘8’, ‘9’ and ‘0’ can be hard to distinguish especially on worn stones.   I am sure errors do and have occurred.    I am not too bothered about the odd comma or full stop but if you find anything glaring then do please let me know.

I have recorded all the obvious head-stones but in the whole cemetery there are some one hundred and ten large head-stones that are face-down and I have not been able to record them.   It will need heavy lifting equipment for them to be turned over, maybe one day.   Also another forty two head-stones are too badly weathered and illegible, two are too deep down and two are heavily overgrown.   In some of these cases I have been able to find the name of someone who it is believed is buried in the particular grave and this I have included in brackets in the hope it may assist you.   A list of all the unrecorded head-stones is included and you should check it.   In the centre of some of the Sections are large open spaces.   You will see what I have described as tablets lying flat on their backs and sometimes with just a corner visible.   I have recorded the ones that are obvious but I am sure I have missed some.   However they record just a grave number, and in most cases just a single name.   So for all the effort in finding them they are not terribly useful.   Equally I may have missed a few head-stones that are under the turf.   If you are aware of a transcription that I have not included then do please tell me.

The cemetery is subject to constant change.   The descriptions and inscriptions are those that I found on a particular day.   Some of the head-stones that were upright when I recorded them are now on their backs and equally some crosses have been broken and damaged.    Vandalism does appear to be a problem and the ground-staff have their work cut out keeping the graveyard in good order.   It sometimes can be most disheartening.   The cemetery does also appear to be open to a number of other uses, particularly a dogs exercise area, a playground and a “lovers lane” and obviously a short cut to the local supermarket.   It should be respected for what it is.

Just a word of thanks to Dave Wells and Greg Clarkson for the help they have given me in preparing these inscriptions.    I must also mention my wife, Rosemary, who, without her efforts and assistance these inscriptions just could not have been done.

We wish you well in your quest.